Inspired by the Bicycle...

It’s ‘Bike Week’ here in Winnipeg – a week-long celebration of the bicycle and everyone who rides. It all kicked off today with ‘Ride Your Bike to Work Day’. And although we have many avid cyclists in the orchestra and symphony staff, we thought we’d do a little digging to see what kind of influence the bicycle has had on classical music.

“I seem to be absolutely born for the cycle,” wrote Gustav Mahler, “and I’ve already reached the stage where all the horses avoid me, but I’m still not good at ringing my bell.” He claimed that only cycling offered any relief from the chronic pain of his hemorrhoids. 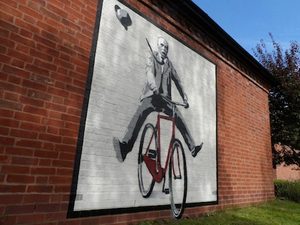 When Edward Elgar, an avid cyclist, was knighted in 1904, he biked more than 80 km on his Royal Sunbeam to break the good news to his elderly father. The composer was given to pedaling around the Malvern Hills, in England, and frequently found musical inspiration while riding his bike, which he named “Mr. Phoebus.” Some of Elgar’s finest tunes came to him as he straddled the saddle. His joy of cycling is celebrated in this artwork at the Elgar Birthplace Museum at Lower Broadheath, Worcester.

Josef Strauss – son of Johann I and brother to Johann II – was an engineer as well as a composer, and inventor of the prototype of the modern street-cleaning vehicle. Not surprisingly, he composed a Velocipede Polka, whose bustling rhythms seem to evoke a brisk ride through Vienna.

San Francisco composer Flip Baber re-orchestrated the Nutcracker Suite for bike parts as a Christmas commission from a bike manufacturer. By sampling sounds from his two bicycles, Baber gives a mechanical twist to the ‘Dance of the Sugar Plum Fairy’.

In 1906, Gustav Holst needed a break from work and took a four-week vacation to Algeria in 1906, during which he set off on a bike ride through the Sahara Desert. Among the musical fruits of his trip was the orchestral suite, Beni Mora.

In 1977, sound artist Richard Lerman put microphones into bicycle frames and recorded the results, which were intended to resemble Southeast Asian gamelan music. Four years later, Smithsonian Folkways recorded a “promenade version,” which consisted of cyclists riding through the streets of Boston and Amsterdam with small amplifiers attached to each bike, picking up the sound of tuned spokes.

The monster of bicycle music is Mauricio Kagel’s Eine Brise (A Breeze), a 1996 piece for 111 cyclists, who ride in formation ringing their bells. Kagel, an experimental Argentinian composer who passed away in 2008, loved unconventional instruments and bizarre combinations. He described the 90-second piece as a “fleeting action for 111 cyclists: a musically enriched sport event in the open.”