*Please silence your cell phone & turn down the brightness*

Crash Test Dummies
arr: Lucas Waldin
God Shuffled His Feet
In the Days of the Caveman
Swimming in Your Ocean
How Does a Duck Know – Orchestra Tacet
Here I Stand Before Me
Two Knights and Maidens
When I Go Out With Artists – Orchestra Tacet
The Psychic 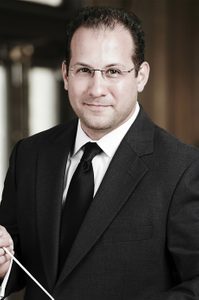 Known for his versatility across a broad spectrum of genres, dynamic interpretations and meticulous technique, American-Canadian conductor Julian Pellicano is the Principal Conductor of Canada’s Royal Winnipeg Ballet and Associate Conductor of the Winnipeg Symphony Orchestra. Bringing an incisive musicality and collaborative spirit to every performance, he has built a wide-ranging international career leading the Winnipeg Free Press to proclaim that “his versatility is truly astonishing.”

As a guest he has conducted orchestras in North America and abroad including the Seattle Symphony, Vancouver Symphony, the National Arts Centre Orchestra, the Orquestra de Valencia, Edmonton Symphony among others. Passionate about the intersection of music and dance, upcoming ballet performances include a debut with the National Ballet of Canada, are turn to Orlando Ballet as well as extensive performing and touring with the Royal Winnipeg Ballet. The Crash Test Dummies are a Canadian rock band from Winnipeg, Manitoba.

The origin of the Crash Test Dummies is tied to the history of two Winnipeg nightspots, the Spectrum Cabaret and the Blue Note Café, owned by Curtis Riddell.

In the mid-1980s, Riddell joined with Brad Roberts to form the decidedly less-than-serious bar band Bad Brad Roberts and the St. James Rhythm Pigs. Over time, the band evolved into the Crash Test Dummies, a name suggested by a friend of the band.

Brad Roberts graduated with an honours in English Literature from the University of Winnipeg. When the band took off, he nixed his plans to pursue a master’s degree and jumped into the music industry.

Music by the Crash test Dummies has been featured in The Spy Who Dumped Me soundtrack and Black Bird soundtrack. “The Ballad of Peter Pumpkinhead” (featuring Ellen Reid) was featured on the Dumb and Dumber soundtrack. How I Met Your Mother – twice, New Girl, and Smallville.